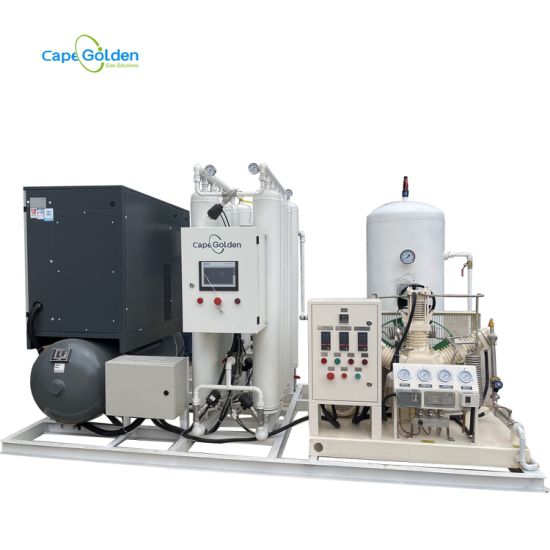 No need to Breathe 100% Oxygen for Diving and Mountaineering
There is one percent (1%) argon and twenty one (21%) percent oxygen in the air. It is hard to remove argon from argon/oxygen mixture with nowadays PSA technology. In theory, the upper limit of oxygen purity is 95.45%. Due to PSA technology and ZMS performance, it is stable and economical to run at purity of 93% with fluctuations. So in PSA Oxygen Generator Plant industry, the 93±3% is a worldwide acknowledged standard. Actually it can reach 95% or can be a little higher but is not stable. And it is absolutely not economical to run the system at 95%. So Oxygen Generator Plant claim 93±3% purity in general, which means lower limit is 90%. For medical use, the lower limit 90% is a compulsory and makes sense. It is not a compulsory for 95% or 96% purity. On the contrary, 96% is an upper limit that means the oxygen purity should not be higher.

There are standards mentioning 99.5% purity oxygen for medical use, which is based on cryogenic technology but not PSA. Cryogenic oxygen contains certain quantity of halogen which is harmful to humans. But there is no such contaminant in PSA oxygen. So the 99.5% is a minimum requirement for cryogenic oxygen purity but not PSA. United States Pharmacopoeia (USP) Oxygen 93% Monograph has specifications as "not less than 90.0% and not more than 96.0%" for PSA oxygen.

It is not necessary for humans to breathe 100% oxygen. For metabolism, oxygen is a must. It is harmful and even fatal to live in hypoxia condition. However, it is also dangerous for human to breathe pure oxygen for long period for it will cause oxygen poisoning. Possible symptoms of the illness are as follows:
1 Irritability, confusion or anxiety
2 Tingling or numbness of the mouth
3 Coughing
4 Nausea, vomiting
5 Tinnitus
6 Dizziness
7 Blurred vision and/or tunnel vision
8 Muscle twitches, especially the face
8 Pneumonia
10 Scarring and bleeding of the lungs
11 Seizures
So it is apparent that higher oxygen purity does not always mean better.

Send your message to this supplier

People who viewed this also viewed